Diabetes is a disease where the body cannot properly produce or use insulin in efficient and normal manner. Insulin is a hormone (made in pancreas) that turns the foods you eat into energy. If your body cannot turn food into energy, not only will your cells be starved for energy, you will also build up glucose (sugar) in your blood. This will lead you to have “high blood glucose levels.” Over the years, the high blood glucose levels can damage major organs like your heart, eyes, and kidneys and can cause heart attacks, stroke, kidney failure, eye blindness, and possible amputation of lower limb(s). 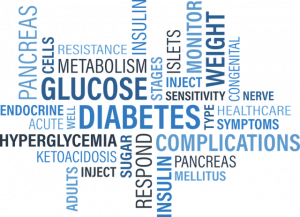 Statistics:
According to the American Diabetes Association, in 2018, there were 34.2 million people in the United States with diabetes; that’s 10.5% of the U.S. population.  The World Health Organization (W.H.O.) states that as of 2014, there were 422 million afflicted with diabetes. Diabetes is found in both men and women over the age of 20. About one-third of diabetics do not know that they have it.  According to W.H.O. , in 2016, it was estimated that 1.6 million deaths were directly caused by diabetes. Also, nearly half of all deaths due to high blood glucose occurred prior to age of 70 years.
African Americans are 1.6 times more likely to have diabetes than Whites. Latinos are 1.5 times more likely to have diabetes than Whites. According to American Diabetes Association, it was estimated that total 2017 cost of diagnosed diabetes in U.S.A. was $327 billion which includes $237 billion in direct medical costs and $90 billion in reduced productivity.

So how is diabetes generally diagnosed?

Type 1 is most often found in children, with the peak incidence at puberty. Type 2 is generally found in adults, however an alarmingly growing number of children are now diagnosed with type 2 Diabetes. One of the main causes is being overweight or obese and more sedentary lifestyle.
Type 1 Diabetes is caused by a total lack of insulin that, in turn, produces high blood glucose levels. Type 1 is most often is seen in children, but can develop in adults. If you have Type 1, your health care provider might recommend scheduled, nutritious meals, exercise, medications (insulin), and frequent blood sugar level tests.
Type 2 Diabetes occurs when the body does not produce enough insulin or cannot properly use insulin. This is the most common type. The treatment may be similar to Type 1.
Pre-diabetes or Borderline Diabetes may occur before a Type 2 diagnosis. Blood glucose levels will be higher than normal. Good nutrition and exercise should be recommended by your health care provider as treatment for pre-diabetes. Even a moderately high blood sugar level is insidious and could affect major organs over time.
Gestational Diabetes occurs in pregnant women that have high blood glucose levels. This type of diabetes can harm both mother and baby. If you have Gestational Diabetes, your health care provider may prescribe meal plans, exercise, daily testing, and medicine.

Symptoms:
The main symptom of diabetes is the lack of insulin activity or the inability for the body to create insulin. Like high blood pressure, there can be no overt or obvious signs of diabetes in many people and it can be silent disease. However, certain symptoms can occur and include:
1. increase in urine production
2. blurry vision
3. irritability
4. extreme hunger
5. excessive weight loss
6. increased fatigue

Causes and Risk Factors:
The exact causes of diabetes are still unknown. However, heredity, obesity, and lack of exercise may play a role. Here are some general risk factors:
1. Your siblings or parents have diabetes.
2. You are more than 20% overweight.
3. You do not exercise or lead a sedentary life.
4. You have had gestational diabetes or you have had a baby over 9 lbs.
5. You have high blood pressure.
6. Your cholesterol level is not normal. 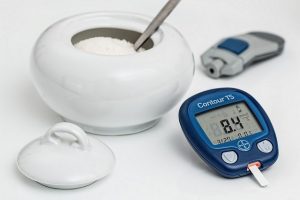 Treatment Options:
According to the American Diabetes Association, people with diabetes have the same nutritional needs as everyone else. In addition to prescribed medications, well-balanced meals may help you keep your blood glucose level as normal as possible.
Also, just like everyone else, exercise is an important part of staying healthy. Exercising with diabetes does require a few extra safety steps that your health care professional can make you aware of.
Nutritious meals, an exercise routine, along with the help of your doctor may aid you in controlling your diabetes. Diabetes will never truly go away, but with proper nutrition, exercise and prescribed medications, it can be controlled so that certain organs are not damaged and worse health consequences do not occur. Nonetheless, in many patients, end organ damage does occur with negative health outcomes despite medical therapies. Hence, early detection, prompt treatment regimens, and strict patient compliance are vital to prevent bad health effects of diabetes.

Outlook:
There is no cure for diabetes, but the treatment options are becoming better than they’ve ever been. Self-monitoring devices for blood glucose levels and administering insulin are the areas that have seen the most improvement. The following are a list of new treatment options that are currently being researched:
1. Insulin Pump Implants – a permanently implanted pump that will measure blood sugar levels and deliver the exact amount of insulin needed.
2. Insulin Capsule Implant – an insulin capsule that can be implanted to continuously release insulin into the bloodstream.
3. Insulin Inhaler – a rapid-acting insulin that is inhaled into the mouth. Currently in clinical trials.
4. Insulin Pill – Currently, the pill form has only been tested in animals.
5. Continuous Monitoring Device – The GlucoWatch Biographer, a wristwatch-like device, has been approved by the FDA. It is intended as a companion for the fingertip blood test to monitor glucose, in order to ensure accurate results.
6. Islet Cell Transplant – For people with Type 1 Diabetes, helps patients become insulin free for up to 14 months after treatment. Currently in clinical trials.
7. Gene Therapy
8. A Diabetes Vaccine – To prevent or slow the progress of Type 1 Diabetes.

Exercise or physical activity has its greatest impact on people with type II diabetes because of its positive effects on insulin sensitivity. Proper exercise and sound nutritional habits work considerably well for type II diabetics. During your post-exercise recovery period, around three to five hours after you complete your exercise session, so-called diabetic diets can be beneficial. Diabetic diets should consist of a sufficient amount of good carbohydrates to prevent hypoglycemia. Consistency is critical in the prevention of type II diabetes. You can’t expect to exercise now and then, and prevent it. You need to make exercise or have active lifestyle part of your life if it’s going to be effective.