The increasing number of people who are overweight or obese is a barometer for the rise in many health problems in U.S.A. as well as in other countries worldwide. The onset of detrimental health consequences depends on the level of weight gain, the amount of time that a person is overweight or obese, and the age of when such weight gain occurs to cause manifestations of unhealthy weight. It is well-established finding that obese and morbidly obese people are at greater risk of premature death; the actual cause of such death are varied, but intertwined with their unhealthy weight. Moreover, even being moderately overweight is major risk factor that triggers the same types of medical conditions that over time can develop into chronic diseases. A wealth of data has shown that overweight or obese people are more likely to suffer from certain diseases or conditions compared to healthy individuals of similar age, gender, and racial or ethnic background. 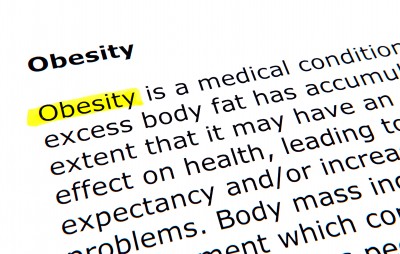 Many people including ones who are overweight or obese do not believe or accept that excess weight contributes to certain diseases since they claim obesity is not primary cause of such conditions. This line of belief or thinking is misleading as a result of the facts that clinical data validates that obesity or having unhealthy Body Mass Index (BMIs) does lead to or induces pathophysiological changes in the body that are actually initiators of certain chronic diseases. Some of these changes depending on age when obesity occurred can be permanent, while other bodily changes can be reversed or eliminated over time by systematic weight loss through healthy living. The prospect of adult and pre-adult population becoming overweight or obese is a looming strain on an already stretched U.S. healthcare system that requires long-term solutions to effectively address this growing phenomenon. The proven and sustaining means for reducing or eliminating the multiple medical conditions is by timely weight loss through healthy living. The spectrum of medical conditions induced by being overweight or obese is presented below; these medical conditions are the leading non-infectious diseases prevalent in U.S.A. and other countries worldwide.

There is direct correlation between increased body weight and blood pressure that is higher than normal range for given age.1,2 The cells in the body get their nutrients and oxygen via intricate network of blood vessels whereby the pumping or beating heart exerts fluid pressure and movement within these vessels. Normal, resting adult pressure is 120/80 mm Hg, the upper number stands for systolic pressure or pressure within blood vessels (primarily major arteries and arterioles) during contraction of the heart, while the lower number called the diastolic pressure represents the pressure within the above blood vessels during relaxation or non-contracting time of the heart. Generally, high blood pressure or hypertension (defined as greater than or equal to 140/90 mm Hg) is present in individuals with 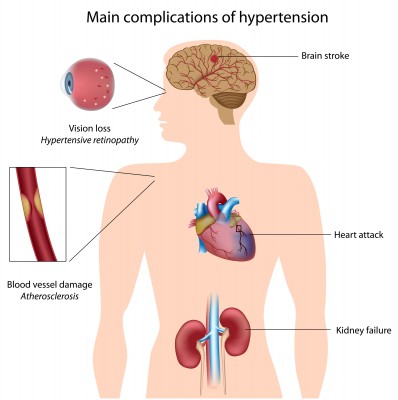 moderate overweight or obesity, most notably in persons with high degree of abdominal or upper body fat.3 The high blood pressure greatly increases the chance of stroke and its potential harmful effects if a major stroke occurs in such individuals.1,2,3 Interestingly, a comprehensive study confirmed the link between onset of stroke and obesity; the greater the obesity, the higher the risk of having a stroke.4 Additionally, high blood pressure is major contributing factor in developing coronary heart disease, blocked arteries or precipitating heart attacks since increased blood (or vascular) pressure triggers set of inflammatory, cellular, and physiological changes within blood vessels and other organs that supply nutrients and oxygen to tissues of the body and the heart itself.

Diabetes is leading cause of morbidity and mortality in U.S.A. and major health issue worldwide. There are more than 26 million people with frank diabetes also known as adult-onset or Type 2 diabetes.5 As the name implies, Type 2 diabetes affects mostly adult population that is characterized by body’s inability to regulate normal levels of blood sugar or glucose between meals, after meals or snacks, and even after state of fasting. A digestive organ called the pancreas makes and releases protein called insulin that along with another protein called glucagon also made in the pancreas function to properly regulate blood glucose levels throughout the day, especially in response to eating or intake of food. Insulin works to bring down blood sugar (or glucose) levels after meals or food intake by stimulation of the body’s cells to uptake glucose into such cells. Glucose is the primary source of energy for nearly all of cellular functions and reactions; thus glucose is necessary and required molecule for the body to properly function. In people who have Type 2 diabetes, individuals secrete sufficient amounts of insulin, but the insulin is unable to function normally to cause uptake of blood glucose into various cells of the body and hence blood sugar levels remain high. However, in many people with Type 2 diabetes, initially they have adequate levels of insulin, but develop insulin deficiency later in the progression of this disorder. It is known that chronically high or unregulated blood sugar levels damages cells and minute blood vessels, inhibits formation of new blood vessels, alters cell membranes, and surface proteins among other biochemical changes. Basically, without proper regulation of blood sugar levels can cause detrimental effects on body’s organs especially on the kidneys, heart and major blood vessels, eyes, dental tissue (periodontal or gum disease), nervous system tissues, and blood vessels in the extremities or peripheral vasculature. People with poorly-controlled Type 2 diabetes can experience kidney failure, vision problems including blindness, are prone to common infections, and leg amputations stemming from impaired sensation in lower limbs, localized ulcers and poor wounding from cellular and tissue damage induced by high levels of blood sugar or glucose levels.

The demographics of Type 2 diabetes is similar to pattern of overweight or obesity seen in adult population in U.S.A. 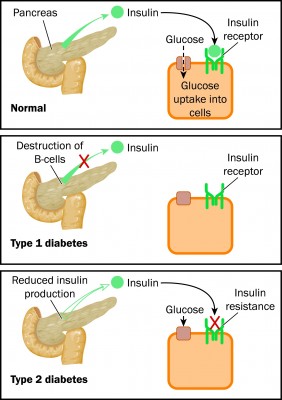 There is marked differences in prevalence of Type 2 diabetes among different racial/ethnic groups. For instance, diagnosed Type 2 diabetes is 77% more prevalent in blacks versus whites, 66% higher in Hispanics compared to whites, 18% higher in Asian-Americans versus whites, and rate of diabetes varying from 22% less prevalent in Alaskan Native to more than 4.5-fold higher rate among American Indians in southern Arizona compared to non-Hispanic whites.6 There is ample evidence to conclude that being overweight or obese increases the likelihood developing Type 2 diabetes. Studies have shown that being obese increases the risk of Type 2 diabetes by at least ten-fold and this risk was further increased with greater weight gain compared to non-obese individuals.7 Moreover, other studies have shown that individuals who lost substantial weight (at least ten-forty lbs.) significantly decreased their chances of chronic diabetes or would experience improved health with weight reduction or prevented ongoing diabetes in one-half of individuals with non-insulin-dependent Type 2 diabetes.8,9,10 The bulk of medical information indicates diabetes, a sequelae of moderate overweight or obesity should be duly addressed by weight loss through healthy living.

Obesity and even moderate overweight does lead to abnormal levels of cholesterol and triglycerides or fatty acids. Cholesterol, an organic heterocyclic molecule that belongs to sterol family of chemicals that is produced in the body (primarily in the liver) and found in certain foods such as egg yolks, dairy products like cheese, beef, chicken or fowl meats, pork or red meats, and seafood like fishes, crab, and shrimp. In summary, cholesterol is found in varying amounts in all animal products that contain animal fats since cholesterol is admixed with such fats.11 Cholesterol is an essential molecule needed in the body for many vital functions; it serves as integral part of cell membranes and maintaining fluid membranes, is precursor for making various steroids (like estrogen, progesterone, testosterone, aldosterone, etc.) in the body, used to make bile salts that aid in the digestion and absorption of fats in food, and is part of white matter or myelin sheath that coat neurons in the brain for faster nerve impulses. Clinical studies have shown people with higher BMIs tend to have higher levels of cholesterol and increased levels of blood fatty acids.12,14 These same individuals have lower levels of “good” cholesterol or high-density lipoprotein (HDL) which acts as protective factor against developing coronary artery disease or atherosclerosis. Lipoproteins are complexes of protein, certain fatty acids, and cholesterol used to transport and deliver cholesterol to cells within the body or where needed for biochemical reactions whose levels are influenced by person’s genetics, type of body structure, food choices, lifestyle choices, and medications.13 Interestingly, a national study that was determining various factors linked to overweight or obesity found that obese individuals had fifty percent greater risk of having high cholesterol levels compared to non-obese or normal BMI individuals.12 The sensible and clinically relevant way to reduce increased levels of cholesterol, raise HDL levels, while reducing LDL (low-density lipoprotein) or “bad” cholesterol levels is by adoption of weight loss through healthy living. 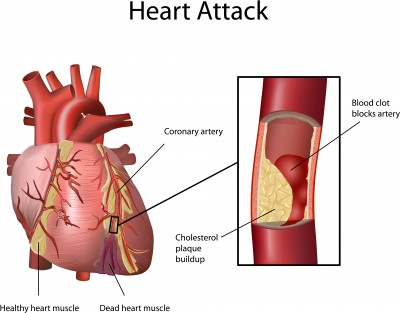 Obesity is major risk factor and contributor to the development and onset of coronary artery disease within the heart and more generally in the pathogenesis of atherosclerosis or formation of cellular plaques and inflammation within certain arteries of the body. The buildup of such cellular, fibrous plaques within arterial walls can lead to occlusion or blockage of such arteries. If this process occurs in one of the major arteries that provide nutrients and oxygenated blood to the heart itself then even a partial or near complete blockage of such artery can lead to heart attack or myocardial infarction. Several independent studies when examining various risk factors such as high cholesterol, high blood pressure, diabetes and obesity to formation of coronary heart disease found that either obesity alone or in conjunction with other primary risks factors like high blood pressure or high cholesterol does lead to coronary artery disease. 15 Moreover, there is direct correlation between development of and onset of heart disease including heart attacks as a result of obesity that can give rise to high cholesterol levels and cause of premature death.15,16 The decreased number of coronary heart disease or heart attack-related deaths is primarily attributed to the widespread use of cholesterol-lowering medications that reduces the associated risk of high cholesterol including “bad” cholesterol that along with obesity does cause heart disease and the medical advances in life-saving procedures and technologies that promptly intervene upon onset of heart attacks to reduce morbidity and mortality stemming from such acute incidents. Thus, it is prudent to begin weight loss through healthy living to minimize or eliminate morbidity and mortality from chronic heart disease before its takes harmful foothold of one’s health.