The role of being overweight and obesity has been well established owing to significant level of clinical and basic research looking into empirical, epidemiological, and experimental evidence for links or causation between weight gain and variously described health disorders and medical conditions. The cumulative effects of unhealthy weight gain on body’s physiological, anatomical, and many functioning system create non-homeostatic conditions that lead abnormal biochemical, cellular, and organ dysfunction. The body’s compensatory mechanisms can counter-act or reestablish functional equilibrium during short-term changes including weight gains. However, when there is significant, long-standing weight gain, then even the compensatory mechanisms aberrantly contribute and cause more permanent changes within the body that give rise to host of chronic conditions and diseases as previously presented herein. Overweight and obesity not only can cause health status of person to change for the worse, but are major components of certain chronic disorders and determinant of negative health outcomes. The beneficial changes obtained by weight loss through healthy living is means to negate the harmful effects that being overweight and obesity has on individual’s body as presented below.

When a person is overweight or obese whether by extra dozen or hundreds of pounds they put tremendous strain on the body’s musculoskeletal systems that support, enable, and allow to body to be upright and move. The body’s musculoskeletal system is programmed to support optimum and maximum amount of body weight based on the bone structures, size of body frame, and supporting elements like muscle and surrounding tissues. This pressure is markedly increased with greater weight to support and ambulate upon voluntary movements for set type of body frame. Arthritis encompass a broad range of disorders that can affect all ages, both genders, and different backgrounds of people. Generally, arthritic conditions arise from some pathophysiological changes within the musculoskeletal systems and its supporting tissues.

The causes of different arthritic diseases depend on the type of arthritis and are varied in nature. Most forms of arthritis have some immunological component, i.e., either the body’s immune system which primarily serves to eliminate foreign particles from the body like viruses, bacteria or any foreign body instead attacks body’s own cells (like joints) or the immune system provides chronic, abnormal response to some physiological changes occurring in tissues like joints or bones, muscles or tendons, and ligaments thereby eliciting pain, swelling, redness, and other signs and symptoms of many arthritic conditions. However, here only arthritis that has co-morbidity with obesity or overweight is presented, namely, osteoarthritis and another arthritis-related condition called gout presented below. 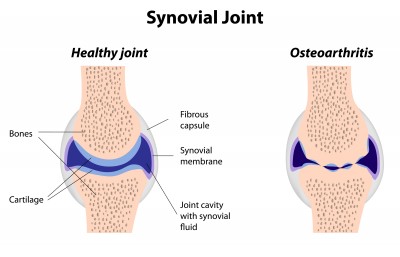 The primary form of arthritis that strikes overweight or obese people is osteoarthritis. Osteoarthritis is the most common form of arthritis and primary of cause of long-term disability accounting for quarter of visits to physicians.1,2,3 Osteoarthritis is a set of arthritic disorders characterized by joint degeneration that affects the cartilaginous lining of the joints, joint bones themselves, and surrounding tissues such as muscles and ligaments are weakened due to either lack of movements in affected joints and repeated injuries or inflammatory changes within the joints. Joints in osteoarthritis undergo degeneration due to some precipitating event like trauma or injury to this joint, inherited joint condition, some mechanical mismatch, being overweight or even metabolic abnormalities within the body can initiate degradation of joints by osteoarthritic process.4 Any joint in the body can be affected, but primarily the joints of the hand, feet, spine and weight-supporting joints like the hip and knee are most commonly observed in persons with osteoarthritis. The findings in person who has osteoarthritis of any joints is that cartilage lining that coats the surfaces of bones in joints is diminished or altered, the joint space between bones is less than normal, there is bone restructuring underneath the joint-facing parts of bones, and in advance stages bone remodeling in form of bone spurs or overgrowths in and around affected joints. Additionally, there is alteration in quality of joint fluid due inflammation within these joints that results in stiffening or reduced mobility of joints. Not surprisingly, osteoarthritis is also referred as “wear-n-tear” arthritis since repeated stress and strain on body-supporting joints like knee, hip, feet, spine, even hands or even acute injuries to such joints trigger immune system to respond and cause changes within and around these joints. Obviously, heavier people are afflicted with more joint damage on weight-bearing joints and many of them require canes to even support themselves or walk and in severely obese people, they require use of wheelchairs. Indeed, studies confirm the strong association between being overweight or obese and osteoarthritis.5,6 The symptoms and degenerative joint changes can be greatly reduced through adoption of weight loss through healthy living so that improved quality of life and health benefits are experienced for those with unhealthy weights.7

Another form of arthritis that is prevalent in overweight or obese people affecting more men than women is form of metabolic arthritis called gout. The estimated prevalence of this disorder is 2% of Western population with blacks twice as more likely to have gout than non-Hispanic whites.8,9,10,11 This arthritis is form of inflammatory arthritis in response to high levels of uric acid within the body. Uric acid is end product of purine metabolism and high uric acids occur when there is dysfunction at level of purine metabolism producing excess uric acid, reduced clearance of uric acid from the body by the kidneys or elimination from the body due congenital or developed constriction within the urinary system. Most cases of high uric acid are due to the latter two causes. When there are high or even normal levels of uric acid in the body or blood, in susceptible individuals, uric acid form monosodium urate crystals that deposit in joints, tendons, surrounding muscles, and tissues. The deposited crystals elicit acute inflammatory reactions within and around the affected joints that cause very strong pain, redness, swelling and even mildly elevated body temperature during acute attack. Usually, such inflammatory episodes clear up within 5-10 days, but future recurrent attacks can be more severe and longer in duration.

The cause of gout is due to several factors including diet, inherited genes, and differences in excretion rates of its 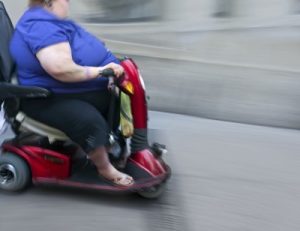 urate salts. However, gout occurs primarily due to inheritance of genes that cause underexcretion of uric acid or overproduction of uric acid is estimated to account for ~60% of this disorder. Additionally, gout is associated with medical condition called metabolic syndrome as presented before in three-fourths of the time.9 There is also strong correlation between occurrence of gout and other diseases like hemolytic anemia, polycythemia, kidney disease or failure, arthritis condition like psoriasis among others.10 There are many factors that can precipitate gout in persons predisposed to this condition such as diet of meat, seafood, alcohol consumption, fructose-based beverages, acute injuries, invasive surgery, and medications like diuretics, aspirin or niacin that somehow trigger acute gout episodes within the body.10,11,12,13 Interestingly, some changes such as cold weather, acidosis, rapid changes in uric acid due physical trauma, surgery or cancer treatment like chemotherapy. Most importantly, it has been shown that men with Body Mass Index (BMI) equal to or greater than 35 were three times more likely to have gout.12 The increasing risk of suffering from gout increases with greater weight gain. 15, 16 It is not surprising finding that gout also increases the risk of diabetes, metabolic syndrome, high blood pressure, kidney disease and heart disease and increases risk of death for these associated conditions.9,14 These increased risk factors in person with gout raise the risk of death triggered by these associated conditions. While it is not exactly clear how this cumulative risk affects people with gout, these underlying medical conditions including gout are amenable to treatment by reduction of weight that markedly reduces or eliminates the harmful effects of these various health disorders that can be effectively reached by weight loss through healthy living.

The state of being overweight or obese not only can cause many health disorders, but can induce or trigger negative health outcomes. It has been reported that very obese people are three-four times more likely to develop gall bladder stones than non-obese people.17,18,19 The formation of such stones is probably related to abnormal levels of cholesterol and impaired secretion of bile salts attributable to severe obesity. Additionally, an interesting observation was found that revealed that obese individuals are twice as likely to form cataracts (opacities within lens of the eyes) than individuals with normal Body Mass Index (BMI).20 Overweight or obese people like healthy-weighted people also experience acute injuries, but their chances of death are higher than for non-obese people. A clinical report showed that excessively overweight individuals (BMI >31) were eight times more likely to die from their injuries and such complications than non-overweight people (BMI <27).21 In fact, the risk of death from surgeries due to being severely overweight or obese is significantly higher than lean people; the death rates increases with increasing body weight.22 It is well established surgical practice to defer elective surgery in obese patient until planned weight reduction is achieved in order to improve their survival rates during complicated surgeries and reduce post-surgical complications. The myriad of health issues and bad outcomes can be avoided or greatly reduced in overweight and obese individuals if they begin their efforts of weight loss through health living which would provide them with improved overall health and quality of life.

5. Deborah J. Hart and Tim D. Spector, “The Relationship of Obesity, Fat Distribution and Osteoarthritis in Women in General Population: The Chingford Study,” The Journal of Rheumatology 20 (2[February 1993]): 331-35.

11. Rheumatology Therapeutics Medical Center. “What are the risk factors for gout?” Retrieved 2007-01-26.

22. Konald A. Prem, Nicholas M. Mensheha, and John L. McKelvey, “Operative Treatment of Adenocarcinoma on the Endometrium in Obese Women,” American Journal of Obstetrics and Gynecology 92 (1[May 1965]):16-22.